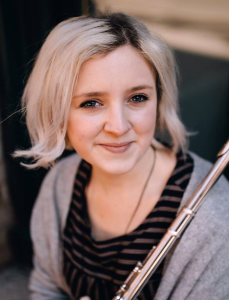 Music School faculty members Erin Dubois and David Ross will perform a Bach’s Lunch concert, Imagery Through Music. The program includes Toward the Sea by Toru Takemitsu for Alto Flute and Guitar, Histoire Du Tango by Astor Piazzolla for Flute and Guitar, and Homenaje a Takemitsu by José Manuel Lezcano. Each piece evokes images and references the history of different cultures and time periods. Takemitsu’s Toward the Sea, commissioned by Greenpeace for the Save the Whales Campaign, contains references to Melville’s Moby Dick through the titles “The Night”, “Moby Dick”, and “Cape Cod” and focuses on emphasizing the spirituality of the book, quoting the passage “meditation and water are wedded together”. In Histoire Du Tango, Piazzolla aims to explore the history of the Tango in four movements: Bordello 1900, Café 1930, Nightclub 1960, and Concert d’Aujourd’hui. Each movement paints a picture of the changes that the Tango went through during each age. Finally, in Homenaje a Takemitsu, Lezcano pays tribute to the composer Toru Takemitsu.

Erin Dubois (flute) holds an M.M. in Flute Performance from UMass Amherst, studying with Christopher Krueger, and a B.A. in Flute Performance from the University of Southern Maine. Additional studies include Le Domaine Forget, the Julius Baker Masterclass, and the ARIA International Summer Music Academy, performing in masterclasses with Alexa Still, Susan Hoeppner, and Robert Dick. Erin has an active freelance career throughout the Northeast as a soloist, chamber musician, and orchestral player, performing with the NH Philharmonic, the Tim Janis Ensemble, and the Precious Metals Flute Ensemble, of which she is a founder. Erin also teaches privately and in public schools, including directing the Litchfield High School Flute Choir.

David Ross (classical guitar) holds Bachelor’s degrees in Guitar Performance and Composition and Theory from Keene State College and an M.M. and Graduate Diploma from the Peabody Conservatory at Johns Hopkins University. He has studied classical guitar with José Lezcano, Julian Gray, and Scott Tennant, and jazz with Paul Bollenback, and has performed in masterclasses with Manuel Barrueco, Eliot Fisk, and Pepe Romero. David has performed throughout the U.S. as a classical and jazz guitarist and has won several international prizes and awards in festivals and competitions. He has taught music theory, ear training, music history, improvisation, and jazz guitar at Keene State College, Vermont Jazz Center, and Fitchburg University.

This concert will be presented live on the Recital Hall stage.

Masks are required for all audience members for this concert.

The Bach’s Lunch Series is sponsored by The Timothy and Abigail B. Walker Lecture Fund.