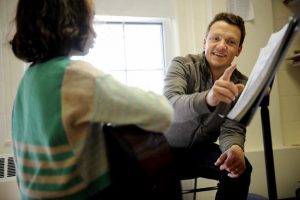 The Board of Trustees of the Concord Community Music School is excited to announce Daniel Acsadi as the School’s new Executive Director. Acsadi will be just the second permanent Executive Director in the history of the institution and will begin his tenure on May 9.

“We were very impressed by the caliber of applicants from all over the country and even outside of the US,” says trustee and co-chair of the search committee Doug Bechtel. “It was clear to the board members, faculty, and staff that Daniel was the top choice, and we’re so thrilled that he will be joining the School later this spring.”

Acsadi currently serves as the Director of Education and Community Programs at the Powers Music School in Belmont, Mass. In his role at Powers, Daniel expanded the curriculum through faculty-led seminars open to students and the public, led Powers’ creative aging initiative with the establishment of the Watch City Singers choir and several collaborations with regional councils on aging, and launched the Powers Certificate Program, supporting the educational goals of the school’s more ambitious students.

In his previous role as director of the Boston Classical Guitar Society, Acsadi helped revitalize the organization by growing its international concert series, community-building initiatives, and annual ensemble festivals. A sought-after guitar instructor, he has taught at Tufts University, Longy School of Music of Bard College, Bridgewater State University, Powers Music School, and the New School of Music. As an active performer in the New England area, he often highlights original arrangements celebrating the rich musical heritage of Hungary, his country of birth. Acsadi received his doctoral and master’s degrees from New England Conservatory while studying with legendary guitarist Eliot Fisk, and earned a BA in economics and music from Cornell University. 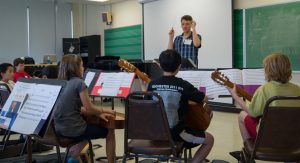 “I’m honored to serve as Concord Community Music School’s executive director,” says Acsadi. “CCMS is home to a wonderful array of private lessons, group programs, expressive therapies, and performances. I’m excited to join this talented and passionate community with the goal of cultivating the many powers of music and the arts throughout our region.”

Acsadi succeeds Interim Executive Director Maryann LaCroix Lindberg, who assumed the role in July 2021 after the departure of CCMS founding President Peggy Senter. “It is exciting to have Daniel take over the helm at the Concord Community Music School,” says Lindberg. “He will be a great fit with this musical community, and I know he will do a wonderful job taking the School to even greater heights.”

Jazz Jam Sessions Join us at the Music School for monthly jazz jam sessions! When: First Tuesday of each month from October to June, 7:00-8:00pm (first session: Oct. 5, 2021) Who: Instrumentalists who want to play jazz together! All instruments welcome, and all levels of experience. Location: Studio A at Concord Community Music School, 24 Fayette Street in ... Read more

Maurizio Fiore Salas, Venezuelan Cuatro and guitar Maurizio will discuss and demonstrate the common musical elements that connect different styles of Latin American folkloric music. Through the use of the rhythmic cell, "tresillo", we can find these elements in different styles and learn how to listen to them, and why they work in the way ... Read more

Sofia Chiarandini, violin – Maurizio Fiore Salas, Venezuelan Cuatro and guitar – Noah Harrington, upright bass The members of the trio first started working together as bandmates in the contemporary string band NYMAN (Noah y Maurizio’s Acoustic Nomads). After realizing the chemistry that they had when playing with each other, a new trio project was ... Read more