Please note: This page is for the CONCERT only. Looking for the Fall Fiddle Festival WORKSHOPS? Click here.

Online ticket sales are now closed. As of Friday morning, fewer than 20 tickets remain. ***Please call 603-228-1196 to purchase tickets by phone, or stop by the Music School Friday or Saturday to purchase in person (while supplies last). 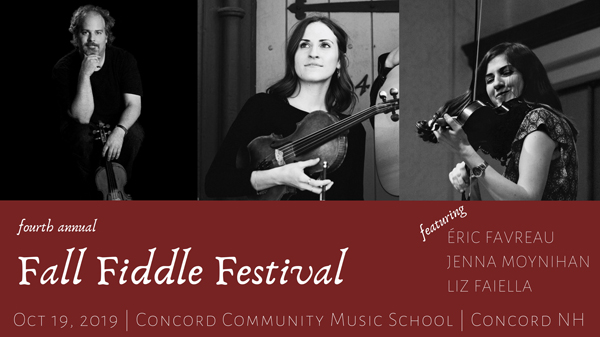 Online ticket sales are now closed. As of Friday morning, fewer than 20 tickets remain. ***Please call 603-228-1196 to purchase tickets by phone, or stop by the Music School Friday or Saturday to purchase in person (while supplies last).

Jenna Moynihan is regarded as one of the best of the best in the new generation of fiddle players. Versatile and inventive, her fiddling style draws strongly from the Scottish tradition, but is not bound by it. Folk Radio UK said of her playing, “…from the first time you hear Moynihan, it is clear that her playing is resonating straight from the depths of her soul.” Jenna graduated from Berklee College of Music with honors and was a recipient of both the Fletcher Bright Award & The American Roots Award. She performs around the world, and had appeared with The Milk Carton Kids, Darol Anger & the Furies Old Blind Dogs, Laura Cortese & The Dance Cards, A Celtic Sojourn & more. She has appeared on Jimmy Kimmel Live!, CBS Sunday Morning, and as a soloist at Symphony Hall. Her debut solo album Woven was released in 2015. Jenna also performs in a duo with harpist Màiri Chaimbeul, their album One Two was released in 2017.

From a family of traditional musicians (his father and uncle were both fiddlers), Éric Favreau has spent a great deal of time playing with other fiddlers, learning their repertoire and studying their styles. He has explored many sources, including music archives, and has made his own field recordings, accumulating and developing a rich and fascinating repertoire. Over the years, he has garnered a profound understanding and vast knowledge of Québécois traditional music. Éric is regularly invited to teach Master Classes at US events and traditional music camps, including American Fiddle Tunes (WA), Swannanoa Gathering (NC), Ashokan Fiddle and Dance Camp (NY), Maine Fiddle Camp (ME) and has performed and taught at the North Atlantic Fiddle Convention in Ireland and Scotland. He has broad experience on both the North American and European music scene both as a solo artists and with the group Entourloupe, and has recorded two solo albums. Reel à Deux, recorded with fiddler Mario Landry,  is a reference for Québec traditional fiddling. He also recorded three albums with Entourloupe (La St-Berdondaine, Les choux pis des melons, Épilogue) and can be heard on at least twenty others.

Liz Faiella’s study of Irish fiddling, training in classical violin, and love of social dancing have shaped her musical approach. Along with her brother, guitarist Dan Faiella, Liz has taken the mainstage at premier folk venues throughout New England, including Club Passim, the Burren Backroom Series, the Acadia Trad Festival, Maine Celtic Celebration, Little Sea Folk Festival, the Seacoast Irish Festival, and the Boston Celtic Music Festival. The duo's debut album, At Long Last (2018), explores heartache, wonder, and joy, expressed through the traditional music they love. Liz has taught at festivals, workshops, and music camps around New England, including the Strathspey and Reel Society of NH, Maine Fiddle Camp, and Acadia School of Traditional Music & Arts. A Concord Community Music School alumna, Liz now teaches fiddle and coaches folk ensembles at the Music School, where she is chair of the Folk, Jazz, and Popular Music Department.

Jeremiah McLane is a composer, accordionist, pianist and teacher with a diverse musical background including blues, jazz, Celtic, Québécois, French and other roots influenced music. He has performed throughout the United States, Canada and Europe, in bands such as The Clayfoot Strutters, Nightingale, The Goat Broke Loose, Allos Musica, Le Bon Vent, and Wheezer & Squeezer. He holds a master’s degree in contemporary improvisation from the New England Conservatory in Boston and in 2005 he started the Floating Bridge Music School, which is devoted to teaching traditional music from the British Isles, Quebec and Northern Europe, and North America, all genres that have influenced the music of his native New England. Since 1990 Jeremiah has released over thirty recordings. Recent releases include a solo project entitled The Grinding Stone; Gnossienne with Chicago-based Allos Musica; and most recently The Wind Among the Reeds with bagpiper Timothy Cummings, which won the Montpelier’s Times-Argus Vermont album of the year award for 2016. He has served on the faculty of the State University of New York in Plattsburgh, New York and currently teaches the Summit School for Traditional Music in Montpelier, Vermont and at the Upper valley Music Center in Lebanon, New Hampshire. He also teaches regularly at summer music programs throughout the United States.

Màiri Chaimbeul is a Boston-based harp player and composer from the Isle of Skye in Scotland. Described by Folk Radio UK as "astonishing", she is known for her versatile sound, which combines deep roots in Gaelic tradition with a distinctive improvising voice and honed classical technique. Màiri tours regularly throughout the UK, Europe and in North America. Màiri can currently be heard regularly in duo with fiddler Jenna Moynihan, progressive-folk group Aerialists, the Brìghde Chaimbeul Trio, and with legendary violinist Darol Anger & the Furies. In 2018 she joined the faculty of the String Department at Berklee College of Music. Màiri was twice-nominated for the BBC Radio 2 Young Folk Award, finalist in the BBC Young Traditional & Jazz Musicians of the Year and twice participated in Savannah Music Festival's prestigious acoustic music seminar. She is a graduate of the Berklee college of music, where she attended with full scholarship, and was awarded the prestigious American Roots Award.