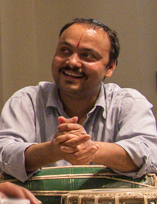 Sagar Khatiwada (Himalaya Heritage Music Program) holds a Master’s degree in music from the Banaras Hindu University in Varanasi, India. He was born in Nepal and comes from a very musical family; his brothers play the bamboo flute and sing. He plays the tabla (a double drum with resonating surfaces on the top side) and the madal (a single drum with resonating surfaces on either end). After graduate work, he was on the music faculty of a university in Nepal. In addition to his musical expertise, Mr. Khatiwada studied Sanskrit and is a Hindu priest. (by special arrangement)