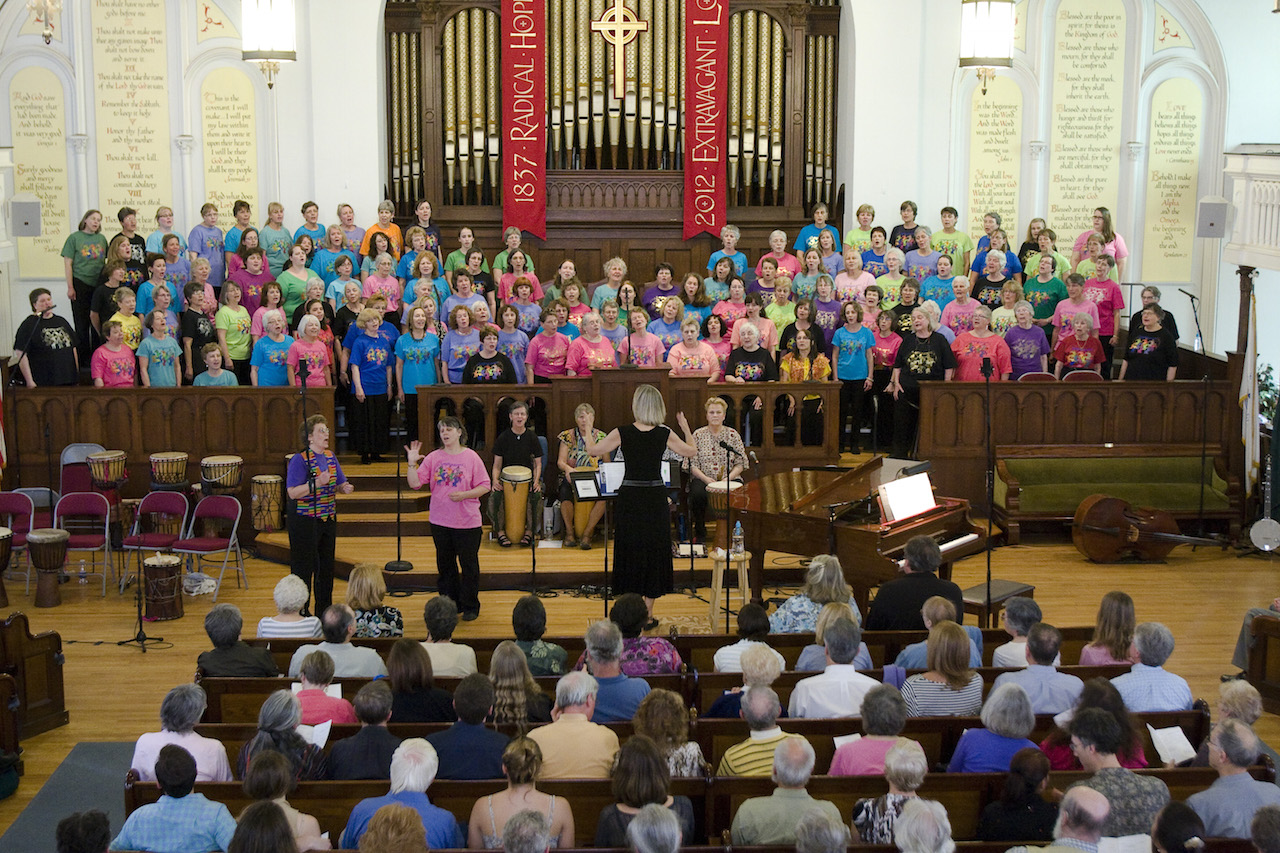 For immediate release: 8 October 2015
Media contact: Liz Faiella, This email address is being protected from spambots. You need JavaScript enabled to view it., 603-228-1196

“What we create is so much more than music,”says director Peggo Horstmann Hodes. “Music is the vehicle. Community is the result. We come every week for the sustenance of both.”

Songweavers was begun by musician Carolyn Parrott, for women who said they couldn’t sing. Twelve women sang that first year, expanding to 24 the next year. Twenty-five years later, the chorus is over 130 women strong, and now includes the Songweaver Drummers.

At their annual spring concert, titled “So Glad I’m Here: Songweavers Celebrates 25 Years,”the group will welcome back founder Carolyn Parrott to accompany the singers on the banjo and to conduct one of her favorite songs, “Jesus Gave Me Water.”Members of the Music School’s Purple Finches Youth Chorus will also add their voices to the performance. The program will include some of the Songweavers greatest hits, including “The Storm Is Passing Over,”“IséOluwa,”and “Waters of Babylon,”as well as new selections including spirituals, songs of peace and justice, and folk songs from various ethnic traditions.

Based on the belief that everyone can sing, the chorus learns songs by rote, in the African-American tradition. Music-reading skills are not a prerequisite. The chorus’s repertoire includes music from many ethnic traditions. Singing is mostly a cappella, although drums and other instruments are often used as accompaniment.

The Songweaver Drummers, who perform with the chorus, explore African-style hand drumming and other percussion, including agogos (bells), shakers, and claves. The group includes drummers Grace Schust, Lindsey Schust, Emilie Meadows, and Peg O’Neil, who learned their craft from Baba Olatunji, a renowned African drummer who brought the style to the United States.

New this year, in addition to their spring concert, the Songweavers will present a concert at the Congregational Church of Derry in East Derry, N.H. They will also sing holiday music on Main Street in Concord as part of Intown Concord’s holiday festivities on December 11.

“Is there anything better going on in the city of Concord, than when the Songweavers are rehearsing?”asks Rick Simpson, former Music School trustee who appears frequently as a tenor soloist in the Monadnock area. “I think if there were a camera on a satellite that could measure positive energy, and you beamed it down on Concord, there would be this huge glow coming up from the Music School.”

“I watch the women’s faces during rehearsals as we sing together,” says Horstmann Hodes, “and no matter what kind of day anyone had, they leave happy, peaceful, and connected to themselves and the whole. We sing in unison and harmony. Our minds quiet down. Our bodies are set free with the music. It is a magical thing that happens every single week.”

About the Concord Community Music School

Concord Community Music School is a full member of the National Guild for Community Arts Education and is recognized nationally for program innovation and management excellence. Welcoming adults, teens, and children of all musical abilities, 53 artist teachers reach more than 33,000 people in four states with educational programs, concerts, workshops, and community partnerships. CCMS has received major funding from the National Endowment for the Arts, the Hearst Foundation, New Hampshire State Council on the Arts, Jane’s Trust, and the New Hampshire Charitable Foundation. The Music School is the 2005 recipient of the NH Governor’s Arts Award for Cultural Access Leadership.