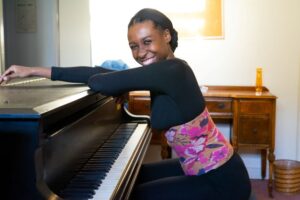 If you come to Concord Community Music School, there’s a decent chance you’ll run into Laurette Nepa. It might be in the recording studio during her audio engineering lessons with faculty member Eric Klaxton. Or maybe in the back stairway, practicing her vocal repertoire in one of the lesser-known rich acoustic spaces in the building. It may even be in the kitchen while she’s grabbing a quick snack. But wherever you bump into her, two things will be hard to ignore: her effervescent spirit, and her love of CCMS.

“This is my home,” she says, beaming. “This place is a safe-haven for me, and I have so many memories of the Music School.”

Born in central Africa to Congolese and Rwandese parents, Nepa and her family escaped genocide in her homeland and came to New Hampshire as refugees when she was just two years old. Her family wasn’t particularly musical, but she remembers listening to contemporary Christian, American gospel, and African music throughout her childhood. And when her second-grade teacher heard her singing in music class, she told Nepa and her parents about the opportunities available at the Music School. In a matter of weeks, she was a member of the Purple Finches Youth Chorus, thanks in large part to the financial assistance that was made available.

“As refugees coming to this country, it was tumultuous in my home growing up,” admits Nepa. “When things were rough at home, I was able to come here and forget about it, and that was my healing.”

She discovered the power of music early at CCMS, and its ability to transcend any cultural and language barriers that emerged. “There are a lot of people who don’t speak French or Swahili, but when I sing to them in French or Swahili, they feel the power.” She sang with the Purple Fiches until she aged out of the group but continued to work with faculty leader Maria Isaak for audition preparation in the years that followed.

Nepa currently works at the state psychiatric hospital, and aside from boosting spirits by singing to patients, she knows that music will be a part of her life forever. She is fine-tuning her skillset in audio engineering, working towards a journalism degree at Colorado Christian University, and saving her money for an eventual move to Los Angeles. Her dream is to work in entertainment: singing, acting, or interviewing people with stories to tell. “People have so much to say and I feel like my generation doesn’t just sit and listen,” notes Nepa.

Nepa is quick to credit her mentors at CCMS for encouraging her and preparing her for her impending move out West. She draws inspiration from founder Peggy Senter as an example of “how powerful it is to have a vision,” and knows she will be prepared when she lands in LA. Most of all, she is excited for the time she is in a position to give back to CCMS and pay forward the support she received as a student.

“There are so many opportunities at the Music School,” says Nepa. “I’m so thankful for the teachers here, and that they give their time after all these years.”

Due to the anticipated winter storm, this recital has been postponed to Wed, Feb. 1. Please join us for an adult student recital on Wednesday, February 1 at 6:30 pm in the Recital Hall. Student recitals are part of the Music School's multi-level curriculum for private lesson students, and these frequent performance opportunities help our ... Read more

Join Peggo and Paul Hodes live on February 9 for their traditional Valentine’s Day Bach’s Lunch, featuring their longtime collaborator Kent Allyn and their daughter Ariana, an alum of CCMS and Nashville-based singer-songwriter. The ensemble will also honor two folk legends who recently passed by performing "Roseville Fair" by Bill Staines, and a medley from ... Read more

Note: This lecture has been rescheduled from February 2nd. In her lecture on Thursday, February 16, music therapist Julieann Hartley will share how we can use music to develop emotional and physical resilience using basic music therapy principles. Bach’s Lunch programs are free and open to the public, and take place from 12:10pm to 12:50pm ... Read more

Get in the Mardi Gras spirit and let the good times roll! On Thursday, February 16 at 7 pm we present a Soggy Po' Boys concert in the Music School Recital Hall, featuring CCMS faculty member Eric Klaxton and former CCMS faculty and alumni Scott Kiefner. Tickets are by general admission and priced at $15. Tickets ... Read more